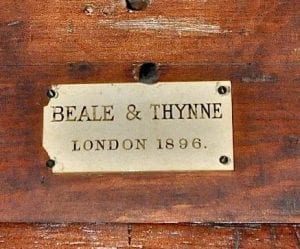 The organ here at St John’s was built in 1896 by the London firm of Beale and Thynne. The name of William Thynne is the important one in this collaboration as he was the organ builder – Beale was merely a business partner.

Whist we are unclear about Thynne’s early life and career, we do know that in 1869 he arrived at the Brixton firm of T.C. Lewis as an apprentice voicer at the age of 30 with no practical experience of organ building. Lewis and Co was founded in 1860 by Thomas Christopher Lewis and the firm went on to produce several fine organs, most notably the organ in Southwark Cathedral and the wonderful example in the Kelvingrove Art Gallery in Glasgow.  When developing his tonal schemes Lewis was inspired by the organs of Edmund Schultz from Germany and Aristide Cavaillé-Coll from France and this broke new and exciting ground when it came to the voicing of instruments in the UK.  William Thynne was undoubtedly influenced by these methods of voicing and went as far as taking them a step further when later voicing his own instruments.

Thynne left, along with another Lewis employee Carlton Mitchell, in 1881 in order to set up independently and one of their major projects was to build an organ for the 1885 Inventions Exhibition. Their aim was to:

This organ was exhibited again the following year at the Liverpool Exhibition where celebrated city organist W.T. Best pronounced it ‘the finest organ of its kind that I have ever played’.

In 1887, the Reverend C.W. Grove purchased the organ and presented it to Tewksbury Abbey to commemorate the Golden Jubilee of Queen Victoria and it was placed in the North Transept where it has remained ever since.

Mitchell and Thynne’s partnership was short-lived and they separated when Mitchell emigrated to America in the late 1880s. Thynne continued organ building and, and it was at this point that Mr Beale came into the business. The output of the firm in the latter years consisted largely of smaller 2 manual organs and the organ here at St John’s is thought to represent Thynne’s largest and most complete work outside of the organ at Tewksbury. It is certainly a very late example given William Thynne’s death in 1897.

Organ at St John the Divine

So, what of this continental influence and its impact on the sound of Willam Thynne’s instruments? The organ here is what one might consider a ‘modest’ three manual instrument  having 25 pipe ranks which provide 31 speaking stops and Thynne is still very clearly working to the same template he employed with the organ at Tewksbury. Every stop has a place and makes a difference, something one would expect to find in continental organs of the period but not necessarily in contemporary English instruments. 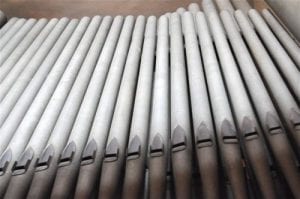 We know that, once released from the limitations Lewis placed on him, Thynne was free to push the boundaries even further in terms of pipe scaling and voicing and one can clearly hear the evidence of this in the organ here at St John’s.

The reeds are fiery, the strings bright and keen and the mixtures, particularly the three-rank mixture on the swell, are dazzlingly brilliant when put into a historical context. Indeed, the swell mixture would almost be a home on a neo-classical instrument of the sixties or seventies. Thynne is credited with inventing the ‘Zauberflöte’ stop (after the Mozart opera of the same name) the first example appearing in the organ at Tewskbury and the last in the organ here. The tone is full, liquid and pure and reference is made in George Audsley’s 1905 tome, ‘The art of organ-building’ to this very example. 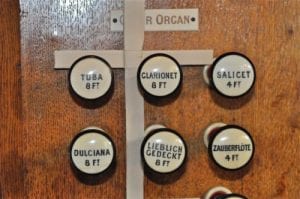 everal examples of fine pipe ranks manufactured by the firm although, interestingly enough, no direct reference is made to the organ here at St John’s, possibly due to this being one of the later instruments or maybe indeed due to the reordering of the church which took place in 1904-5. Lewis and Co undertook further work on the organ at this time, although by this point, Thomas Christopher had departed the firm. There are significant parts of the console, in particular, which have a ‘Lewis’ feel to them. We are uncertain about whether the manual key actions were originally mechanical and, if there were, they were converted to pneumatic operation as part of this work.

More recent work on the organ

Further work was undertaken by the firm of J.W Walker & Sons in the 1960s and in addition to replacing the pedalboard, swell pedal and converting the Pedal chests to electro-pneumatic operation, we believe they may have changed the pitch of the organ.

There has been more recent restoration work  consisting of releathering the pneumatic key actions and slider machines, overhauling the couplers, repairing and cleaning pipework and releathering reservoirs. Unfortunately,some further electrification of actions was introduced at this time. Although the organ is reasonably clean inside, and none of the pipework is compromised by dirt or dust, the state of the actions means that speech of some of some pipework is inconsistent and uneven and it is clear that a significant amount of work remains to be undertaken if the organ is to speak at its best. The outgoing Director of the firm of Harrison and Harrison, who now look after the instrument, notes that ‘This is a fine and notable organ. The quality of construction can be seen throughout the instrument but partial electrification undermines this.’

Last year, I was able to meet with friend and former mentor, Dr Harry Bramma, who is one of the Diocesan Organ Advisors as well as being a great enthusiast of this organ, and eminent organ advisor Dr William McVicker to discuss how to approach restoration. They are both very much of the view, as am I, that this is a special organ which needs to be put back to, and preserved, in as near original condition as possible. Whilst this is not a cheap and easy option, it is something we will hopefully be able to apply for funding for given the uniqueness of the installation. The next stage is to apply for a historic organ certificate and then go through the process of obtaining quotes in order to take to potential funding bodies. In his 2015 article ‘Is a signature tonal style important today – A historical perspective’ Harry describes the St John’s organ as being ‘very remarkable’ and ‘a work of originality and conviction’. We are most certainly very proud of it and hope you enjoy listening to it today.