On this occasion the ringers rang Grandsire Doubles which is a method of changes for five bells, with three bells following in 7-6-8 order. The quarter peal consisted of 1259 changes and took 52 minutes.

Tower captain Jackie Harrison said she was pleased that St Mary’s had made a contribution to the county-wide celebration of ringing and thanked Paul Flavell from Kingston for conducting the quarter and Paul Newton and Stephen Mitchell (both from All Hallows, Twickenham) for supporting the Richmond ringers. These were: Sarah Percival, Jackie Harrison, Andrew Harvey, Martin Crick and Amanda Adams.

Richmond Ringers in solemn tribute to the Queen 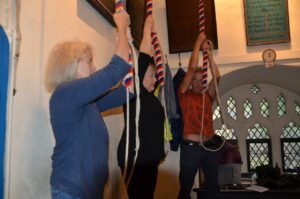 St Mary Magdalene bell ringers took part in the national mourning for the passing of Queen Elizabeth II. Responding to the request from Buckingham Palace for solemn ringing as a mark of respect for the late sovereign, the bells were rung with muffles at midday on Friday 9 September, the day after she died at Balmoral. 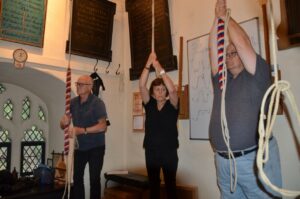 Muffled ringing is the traditional way of marking sombre occasions such as funerals and the annual Sunday services of Remembrance.

A number of people gathered at St Mary’s to hear the bells and watch them being rung via a link to a big screen in the church from the bell tower.